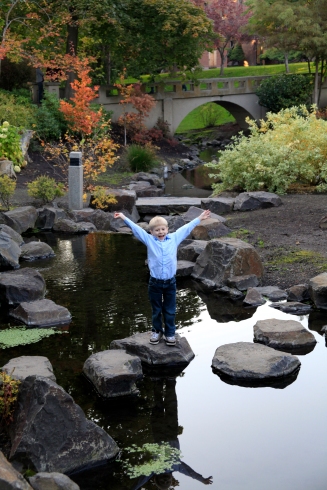 I’ve heard it said, that for the first 10-12 years of parenting, your children embarrass you.  But after that, you get to embarrass them!

A well-meaning lady in the store asked Micah if he was in school.

He enthusiastically answered, “Yes!  I’m in Kindergarten!  And, I’m Homeschooled!”

Micah’s response: “It IS great, because instead of spending a long time on math, we just do 2 or 3 minutes of math and then we’re done!”

I don’t think that sweet lady will be nominating me for ‘Teacher of the Year’ anytime soon.

(Just to clarify … we spend much more than 2 or 3 minutes on math each day.  And, even though Micah is telling time quite well, he’s not allowed to “watch” his watch while we’re doing schoolwork.  So, in the end, I’m truly glad that he’s having so much fun with his curriculum that the time seems to fly by.)

We spent the first two weeks of December on the beautiful island of Maui.  It was a wonderful, busy-but-relaxing family get-away, and was a lot of fun!

The first week was colder, and the wind picked up in the afternoons, but the kids didn’t mind at all.  You see, we bought a week’s pass to the Maui Ocean Center, and the kids loved every minute we spent at the aquarium.

There is a tunnel through the shark and sting-ray tank, which is quite an experience.  As I was trying (unsuccessfully) to line up the kids for a photo in the tunnel, Aaron pointed to the biggest shark of all, and said, “Tiger Shark!”  I snapped the photo just in time to catch Micah’s reaction: 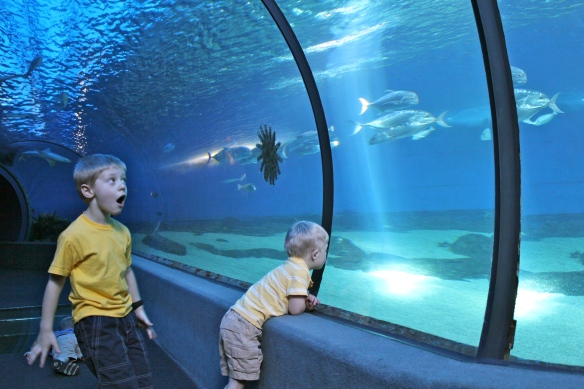 Micah, of course, took it upon himself to learn the names of as many fish as he could, and by the end of the week was acting as a tour guide for other visitors of the aquarium.  We took the video camera along, if you care to join him for a virtual tour: (warning: video is almost 10 minutes long.) 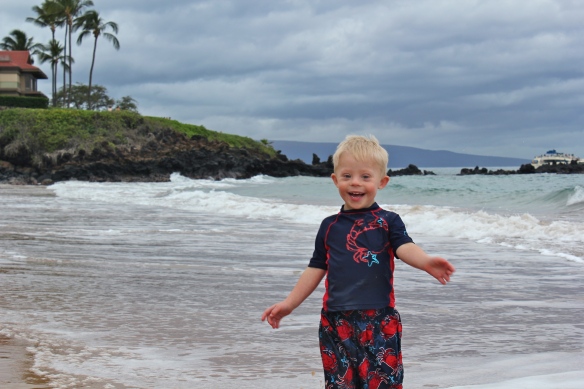 Micah’s new-found knowledge was great while we were snorkeling, because he knew the names of most of the fish we saw!  We went on one guided snorkel tour, and saw a humpback whale from the boat.  We also got to snorkel with giant green sea turtles – a definite first for me!  I never imagined I’d be ten feet away from a 450-lb turtle in the wild!

One of the most valuable things we brought home from the trip … and the thing which might, by itself, be worth every penny we spent … is the fact that Micah is now considering alternate career choices!  Our set-in-stone Paleontologist discovered that it’s fun to learn about living creatures, and is now talking about wanting to be a Marine Biologist, or a Snorkel/Scuba Tour Guide, or a Teacher, or own his own Aquarium … while maybe doing a little digging for fossils on the side.  Regardless, his parents are enjoying a much needed break from the non-stop dino and fossil talk around the house!

Oh … and Matthew spent the entire two weeks completely accident-free … plane rides, boat tours, car trips, swimming pools, exciting activities, and all … he told us “potty” when he needed to go, and that was that!

Just before Christmas, we received a wonderful gift.  Our 20-week ultrasound showed a healthy baby (as far as ultrasound technology can tell).  I can’t tell you how wonderful it was to see a beautiful, healthy, perfect heart beating on that grainy black-and-white screen!

We are also thrilled to announce that #4 appears to be a GIRL!  Boy, oh boy … our house full of boys is in for a change!  Micah was “99% sure” that we would have a girl this time, because that’s what he had been praying for.  Oh, to have faith like a child!

We are so very thankful.