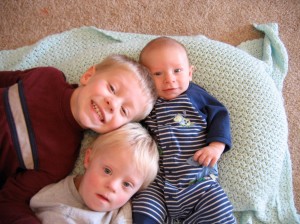 When we arrived at Shriner’s last week, I thought we would exchange cast #5 for #6, and hopefully get definitive word on whether or not Jesse would need surgery on his Achilles tendon, based on the X-ray.  When Dr. Aiona entered the exam room, he had a perplexed look on his face and tentatively said, “Well, the X-ray looks ok …”  Uh-oh.  That’s not the fantastic news we were hoping for.

It turns out that Jesse’s foot is just not “fitting the mold,”  (surprise, surprise … he’s one of ours!) and has his doctor a little puzzled.  The Achilles tendon is not tight, and Jesse’s foot has plenty of dorsiflexion, so there will be no need to cut the tendon (Hurray!!).

But, there are a couple of bones in his foot that are not lining up correctly, and the only thing we can do about it is “wait and see.”  Hopefully, as he grows and his muscles develop, his muscles and tendons will pull those bones into place.  I’m not sure what happens if they don’t …

Also, the tendons on the top of his foot seem tighter than they should be – near the area where the bones aren’t lining up.  The doctor said it’s almost as if his foot is bending in the middle of the foot instead of at the ankle.

Here is what his foot looked like after the cast was removed:  In the profile picture you can see the “bump” on the top of his foot from the misaligned bones.  He is also very flat-footed, with no arch whatsoever. 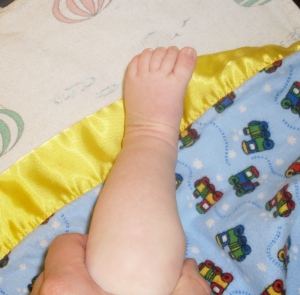 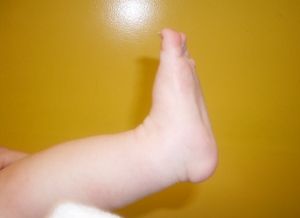 But, Dr. Aiona felt that another cast wouldn’t do any good, so we moved on to bracing.  He is supposed to wear this contraption 24/7, and then we will head back to Shriner’s in a month for a check-up.  Yes, a whole month without a trip to Portland!  That will be nice. 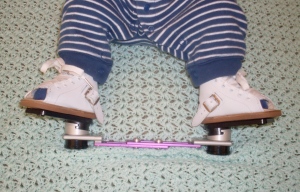 "Awww, Mom! All the other newborns are wearing Robeez!"

The first few days, he was incredibly fussy with these shoes – even more so than with the casts, but he has become more used to them now.  We’ve all had to learn how to live with these braces, which has involved several modifications, like a pillow for his feet to rest on at night and cutting the feet off of all of his little outfits.  Luckily, I can still wear him in the baby bjorn, which is his favorite place to be:

The shoes are starting to give him a pressure sore on his left foot, so Shriner’s is sending me some special padding to put inside the shoe.  Hopefully that will help, but meanwhile we get to leave his shoes off for longer periods of time, as long as we are massaging and moving his foot.  The longer he’s been out of the cast, the better his foot looks to me – and the tendons that were tight on the top of his foot seem to be loosening up.  He still has the “bump,” though, so we would appreciate continued prayers for healing and proper bone alignment. 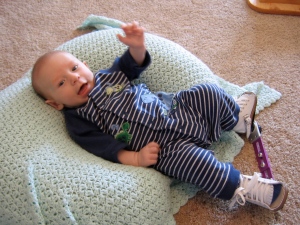 Meanwhile, he’ll be wearing the brace until he can stand up on his own … then he’ll only wear it at night for the next 2-4 years.  Jesse, no one could make them look cuter than you do, though!

I hate needles.  I’m pretty tough myself, but I hate it when my children have to get “stuck.”  Every time they need immunizations, I get a knot in my stomach starting the night before, and I want to just cry along with them in the doctor’s office.  I can’t stand seeing my children in pain, even though I know it is best for them, and am so very thankful for the immunizations!

Because Matthew has Down syndrome, he also has to have yearly lab tests.  People with Down syndrome have a higher chance of having thyroid dysfunction, leukemia, and other diseases, so he gets his blood taken once a year to make sure he’s healthy.  I know he needs the tests, but I still hate the needles!  This year, I asked his doctor for some EMLA cream (a topical anesthetic) to see if it would help.

The cream numbs the skin, but is a prescription and must be applied 45-60 minutes ahead of time – so it takes some planning ahead.  When the technician first poked Matthew with the needle to draw his blood, he looked and acted like he didn’t feel it at all – didn’t even flinch!  But, then she had to “dig” a little bit to find his vein, and he started to cry.  It was short-lived, though, and the whole experience was much less traumatic (for both of us!) than I had anticipated.  I think the EMLA really helped.

I thought I would share the EMLA idea with you other mommas, but I’m curious about your own experiences.  What have you tried to make these experiences better or less painful?  Has anything worked for you?  What about immunizations?  Micah’s 4-year old appointment is coming up (4 shots!!) and I’m already dreading it.  Our doctor said the EMLA works well for blood draws, but doesn’t help very much for shots because the pain from the shots is quite a bit deeper.

Our Lion and Tiger and Bear!!

This Halloween, all the kids were cute, but I thought my little lion was especially adorable! 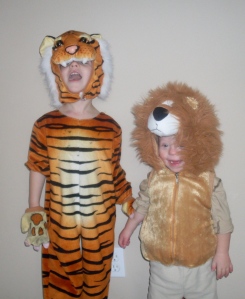 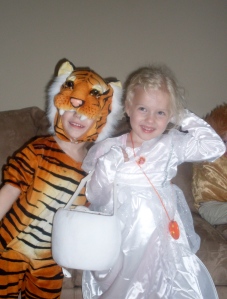 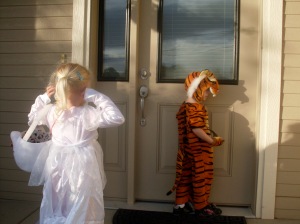